← Back to John MacArthur's Bio & Resources

Ancient versions and modern translations consistently entitle this book after Ruth the Moabitess heroine, who is mentioned by name twelve times (1:4 to 4:13). Only two OT books receive their names from women—Ruth and Esther. The OT does not again refer to Ruth, while the NT mentions her just once—in the context of Christ’s genealogy (Matt. 1:5; cf. 4:18–22). “Ruth” most likely comes from a Moabite and/or Hebrew word meaning “friendship.” Ruth arrived in Bethlehem as a foreigner (2:10), became a maidservant (2:13), married wealthy Boaz (4:13), and discovered herself in the physical lineage of Christ (Matt. 1:5). 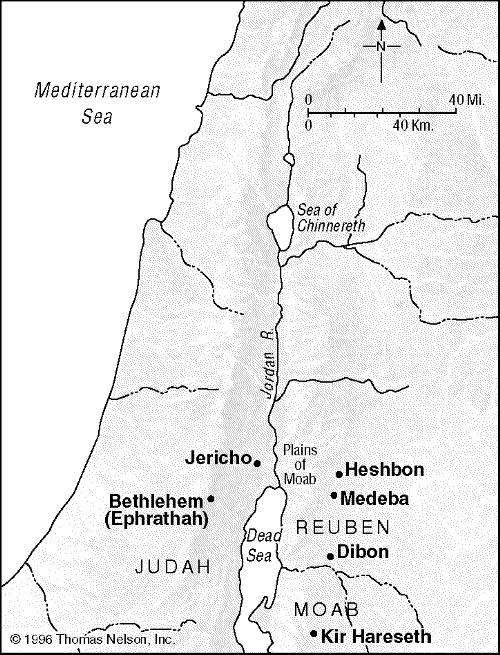 Jewish tradition credits Samuel as the author, which is plausible since he did not die (1 Sam. 25:1) until after he had anointed David as God’s chosen king (1 Sam. 16:6–13). However, neither internal features nor external testimony conclusively identifies the writer. This exquisite story most likely appeared shortly before or during David’s reign of Israel (1011–971 B.C.) since David is mentioned (4:17, 22) but not Solomon. Goethe reportedly labeled this piece of anonymous but unexcelled literature as “the loveliest, complete work on a small scale.” What Venus is to statuary and the Mona Lisa is to paintings, Ruth is to literature.

All 85 verses of Ruth have been accepted as canonical by the Jews. Along with Song of Solomon, Esther, Ecclesiastes, and Lamentations, Ruth stands with the OT books of the Megilloth or “five scrolls.” Rabbis read these books in the synagogue on five special occasions during the year—Ruth being read at Pentecost due to the harvest scenes of Ruth 2–3.

Genealogically, Ruth looks back almost 900 years to events in the time of Jacob (4:11) and forward about 100 years to the coming reign of David (4:17, 22). While Joshua and Judges emphasize the legacy of the nation and their land of promise, Ruth focuses on the lineage of David back to the Patriarchal era.

At least seven major theological themes emerge in Ruth. First, Ruth the Moabitess illustrates that God’s redemptive plan extended beyond the Jews to Gentiles (2:12). Second, Ruth demonstrates that women are co-heirs with men of God’s salvation grace (cf. 1 Pet. 3:7). Third, Ruth portrays the virtuous woman of Proverbs 31:10 (cf. 3:11). Fourth, Ruth describes God’s sovereign (1:6; 4:13) and providential care (2:3) of seemingly unimportant people at apparently insignificant times which later prove to be monumentally crucial to accomplishing God’s will. Fifth, Ruth along with Tamar (Gen. 38), Rahab (Josh. 2) and Bathsheba (2 Sam. 11–12) stand in the genealogy of the Messianic line (4:17, 22; cf. Matt. 1:5). Sixth, Boaz, as a type of Christ, becomes Ruth’s kinsman-redeemer (4:1–12). Finally, David’s right (and thus Christ’s right) to the throne of Israel is traced back to Judah (4:18–22; cf. Gen. 49:8–12).

Ruth should be understood as a true historical account. The reliable facts surrounding Ruth, in addition to its complete compatibility with Judges plus 1 and 2 Samuel, confirm Ruth’s authenticity. However, some individual difficulties require careful attention. First, how could Ruth worship at the tabernacle then in Shiloh (1 Sam. 4:4), since Deuteronomy 23:3 expressly forbids Moabites from entering the assembly for ten generations? Since the Jews entered the land ca. 1405B.C. and Ruth was not born until ca. 1150 B.C., she then represented at least the eleventh generation (probably later) if the time limitation ended at ten generations. If “ten generations” was an idiom meaning “forever” as ehemiah1 13:1 implies, then Ruth would be like the foreigner of Isaiah 56:1–8 who joined himself to the LORD (1:16) thus gaining entrance to the assembly.

Second, are there not immoral overtones to Boaz and Ruth spending the night together before marriage (3:3–18)? Ruth engaged in a common ancient Near Eastern custom by asking Boaz to take her for his wife as symbolically pictured by throwing a garment over the intended woman (3:9), just as Jehovah spread His garment over Israel (Ezek. 16:8). The text does not even hint at the slightest moral impropriety, noting that Ruth slept at his feet (3:14). Thus, Boaz became God’s answer to his own earlier prayer for Ruth (2:12).

Third, would not the levirate principle of Deuteronomy 25:5, 6 lead to incest and/or polygamy if the nearest relative was already married? God would not design a good plan to involve the grossest of immoralities punishable by death. It is to be assumed that the implementation of Deuteronomy 25:5, 6 could involve only the nearest relative who was eligible for marriage as qualified by other stipulations of the law.

1. In compliance with Grace To You's Copyright Policy, we are unable to edit the content in any way. It is worth noting in this instance that the MacArthur Study Bible states "Nehemiah" instead of "ehemiah."

This Grace to You article originally appeared here.
Copyright 2007, Grace to You. All rights reserved. Used by permission.