When accessing information about verbs throughout our New Testament concordance, you'll find numerous references to Greek verb tenses, their voice, and their mood. The following list identifies each verb tense and its part in speech via a comparative example in English using the the verb "to loose."

To access the verb's tense, voice, and mood, press the parsing button next to the word that you are interested in: 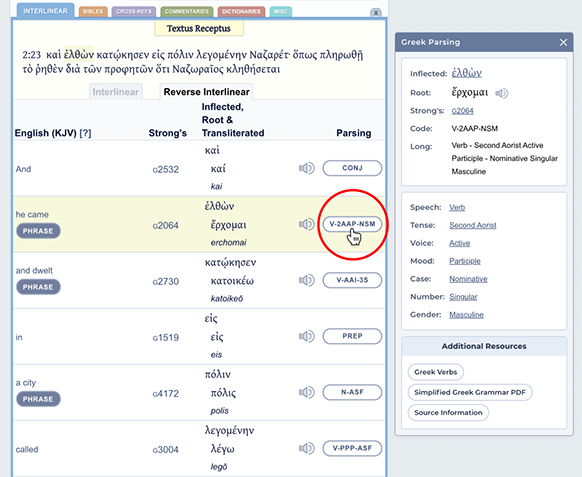 Before discussing tense, voice, and mood, it is first necessary to have an understanding of person and number.

Person: This is what determines whether the subject is the speaker (first person), is being spoken to (second person) or being spoken about (third person).

Number: This is what determines whether a verb is singular or plural.

Tense plays a very crucial role in the study of New Testament exegesis. Dana and Mantey understood its significance in saying that "no element of the Greek language is of more importance to the student of the New Testament than the matter of tense". [1] Tense deals both with time and kind of action. Ancient Greek focused more on the latter of these aspects (that is, kind of action); however, time does play a role in verb tense when the mood is indicative (the four moods are explained below).

The aspect of a verb correlates with the kind of action. It determines whether the verb's action is punctiliar, linear or perfected. These are described in the following table.

The action of the imperfect tense is very similar to that of the present tense. It represents continuous or reoccuring action in the past time (when used with the indicative). This is best translated as "I was loosing."

This tense is hardly a tense at all. It describes indefinite or undefined action. The word aoristos derives from an alpha privative (ie. negation) and the verb horizô (meaning "to bound") thus meaning "without boundaries". [2] With the indicative mood it is often best translated as a simple past: "I loosed."

This tense generally denotes action that will occur in the future. This is best translated as "I will loose."

Action that has been completed in the past yet has results occurring in the present are expressed by the perfect tense. The perfect is often translated as "I have loosened."

The pluperfect has the same aspect as the perfect, yet it's time is farther removed into the past than that of the perfect. Both the completed action and the results of that action occur in the past. It also represents action that is complete and viewed from a point in the past time. [3] The usual translation for the pluperfect is "I had loosened."

This occurs when the action of the verb is being performed by the subject.

When the subject of the verb does action unto itself, or for its own benefit, the middle voice is used.

The passive represents the action of the verb being done unto the subject but not by the subject.

There are four moods in Greek. They demonstrate the relationship between the action of the verb and reality. They denote whether the action is factual, potential, wishful, or a command.

This is the mood of assertion or presentation of certainty. [4] The indicative mood is the only one to give designation concerning time (past, present, and future). The majority of all verbs used in the New Testament occur in the indicative mood.

This is the mood of probability or desirability. It, however, has many usages and this is only a general definition.

This mood is reserved for the indication of commands.

An infinitive is a verbal noun. Neither person nor number are found in the infinitive and it does not have mood designation. It is best translated, "to loose."

For additional information regarding Greek verbs and other grammatical issues the following books should be of great value:

← Back to Help tutorials