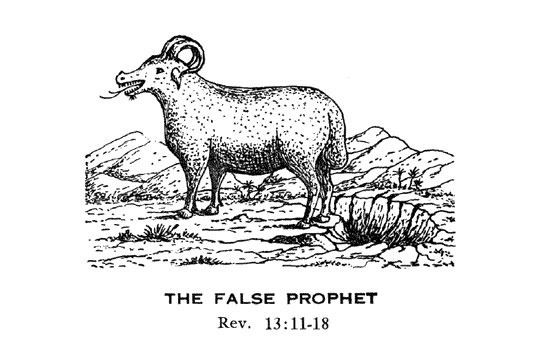 The members of it are-

We have spoken of the first two under the heads of Satan and Antichrist, all that we need to consider in this chapter is-

After the Apostle John had seen and described the "Beast" that came up out of the SEA, he saw another "Beast" come up out of the EARTH. This "Second Beast," while John does not say it was a lamb, had "Two Horns" "like a lamb," that is, it was LAMB-LIKE. Because of this resemblance many claim that the "Second Beast" is the Antichrist, for Antichrist is supposed to imitate Christ. While the LAMB (Christ) is mentioned in the Book of Revelation 22 times, the description given of Him in chapter 5:6, is that of a lamb having "SEVEN HORNS" and not "TWO." This differentiates Him from the "lamb like Beast" that comes up out of the earth, who, though he is "lamb-like in appearance SPEAKS AS A DRAGON."

The "Second Beast" has a name. He is called the "FALSE PROPHET" three times. First in chapter 16:13, then in chapter 19:20, and again in chapter 20:10. Twice he is associated with the "First Beast" (Antichrist) and once with the "Dragon" (Satan) and the "First Beast," and as they are PERSONS so must he be. The fact that he is called the "False Prophet" is proof that he is not the "Antichrist." Jesus had a foreview of him when He said "There shall arise 'FALSE CHRISTS' and 'FALSE PROPHETS,' and shall show GREAT SIGNS AND WONDERS insomuch that, if it were possible they shall deceive the very elect." Matt. 24:24. Here Jesus differentiates between "FALSE CHRISTS" and "FALSE PROPHETS," therefore the "ANTICHRIST" and the "FALSE PROPHET" cannot be the same.

That the "Second Beast" comes up out of the EARTH may signify that he will be a resurrected person. If, as was hinted at, "Antichrist" was Judas resurrected, why should not the "False Prophet" also be a resurrected person? There will be two persons, as we have seen, who shall come back from Heaven as the "Two Witnesses," Moses and Elijah, why not two persons come up from "The Underworld," brought up by Satan to counteract the work of the "Two Witnesses"? The fact that the "First Beast" (Antichrist) and the "Second Beast" (False Prophet) are cast ALIVE into the "Lake of Fire" (Rev. 19:20) is further proof that they are more than ordinary mortals, and that the "First Beast" is more than the last ruling Emperor of the revived Roman Empire. He is the Antichrist, Satan's SUPERMAN.

Again the "Antichrist" is to be a KING and rule over a KINGDOM. He will accept the "Kingdoms of this world" that Satan offered Christ, and that Christ refused. Matt. 4:8-10. He will also EXALT himself, and claim to be God. 2 Thess. 2:4. But the "False Prophet" is not a King, He does not exalt himself, he exalts the "First Beast" (Antichrist). His relation to the "First Beast" is the same as the Holy Spirit's relation to Christ. He causeth the earth and them which dwell therein to worship the "First Beast." He also has power to give life, and in this he imitates the Holy Spirit. And as the followers of Christ are sealed by the Holy Spirit until the "Day of Redemption" (Eph. 4:30); so, the followers of Antichrist shall be sealed by the False Prophet until the "Day of Perdition." Rev. 13:16-17.

The False Prophet will be a "Miracle Worker." While Jesus was a "miracle worker," He did all His mighty works in the "power" of the Holy Spirit. Acts 10:38. Among the miracles that the False Prophet will perform he will bring down FIRE FROM HEAVEN. As we have seen under the work of the "Two Witnesses," Rev. 11:1-14, there will probably be a "FIRE TEST" between Elijah and the False Prophet, and the test as to who is God of Mount Carmel will be repeated. That Satan, who will then energize the False Prophet, can do this is clear from Job 1:16, where Satan, having secured permission from God to touch all that job had, brought down "fire from heaven" and burned up job's sheep and servants.

The False Prophet then commands the people to make an

"IMAGE OF THE BEAST."

This is further proof that the "First Beast" is the Antichrist. It is a strange weakness of mankind that they must have some VISIBLE God to worship, and when the Children of Israel, who had been delivered from Egypt under Moses' leadership, thought he had forsaken them because he did not come down from the Mount, they called Aaron to make them gods which should go before them, and Aaron made for them the "GOLDEN CALF." Ex. 32:1-6. So the False Prophet will have the people make for the purpose of worship an "IMAGE OF THE BEAST." But the wonderful thing about the "IMAGE" is that the False Prophet will have power to give LIFE to it, and cause it to SPEAK, and to demand that all who will not worship it shall be put to death. In other words the "IMAGE" will be a living, speaking, AUTOMATON.

This "Image" reminds us of the "GOLDEN IMAGE" that Nebuchadnezzar commanded to be made and set up in the "Plain of Dura," in the Province of Babylon (Dan. 3:1-30), before which, at the sounding of musical instruments, the people were commanded to bow down and worship under penalty, for those who disobeyed, of being cast into a "BURNING FIERY FURNACE." Doubtless there will be many in the "Day of Antichrist" who will refuse to bow down and worship the "Image of the Beast," and who will not escape as did the "Three Hebrew Children," though God may interpose in a miraculous way to deliver some. And as if this was not enough the False Prophet shall cause "ALL, both small and great, rich and poor, free and bond, to receive a 'MARK' in their RIGHT HAND, or in their FOREHEAD; and that no man might BUY or SELL, save he that has the 'MARK' or the 'NAME OF THE BEAST,' or the 'NUMBER OF HIS NAME." This "MARK" will be known as the

This is what the world is fast coming to. The time is not far distant when the various "Trusts" and "Combinations of Capital" will be merged into a "FEDERATION OF TRUSTS," at the head of which shall be a "NAPOLEON OF CAPITAL." Ultimately this "Federation of Trusts" will extend to the whole world, at the head of which shall be THE ANTICHRIST, and the producer and consumer will be powerless in the tentacles of this OCTOPUS, and no man shall be able to BUY or SELL who has not the "MARK OF THE BEAST" either upon his "right hand" or on his "forehead." This "Mark" will be BRANDED or burnt on. It will probably be the "NUMBER OF THE BEAST" or "666." The number "666" is the "NUMBER OF MAN," and stops short of the perfect number SEVEN. Man was created on the SIXTH day. Goliath the opposer of God's people, a type of Satan, was 6 cubits in height, he had 6 pieces of armor, and his spearhead weighed 600 shekels. 1 Sam. 17:4-7. Nebuchadnezzar's Image, a type of the "Image of the Beast," was 60 cubits in height, 6 cubits wide, and 6 instruments of music summoned the worshippers. Dan. 3:1-7. 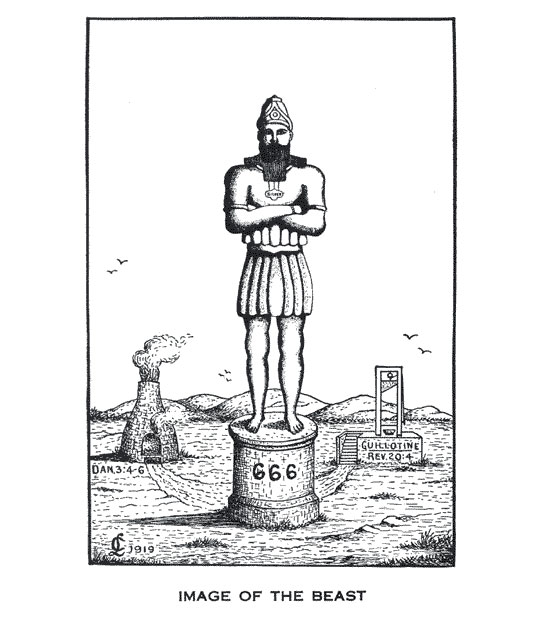 In that day men will doubtless prefer to have the "MARK" on the back of their right hand so it can be readily seen in the act of signing checks, drafts, and receipts. There will doubtless be public officials in all public places of business to see that no one buys or sells who has not the "MARK." This will apply to women as well as men. No one can shop, or even buy from the huckster at the door, without the "MARK," under penalty of DEATH. Those will be awful times for those who will, not WORSHIP THE BEAST. If they can neither buy nor sell without the "MARK," they must beg, or starve or be killed. The instrument of death will be the guillotine (Rev. 20:4), and the daily papers will contain a list of the names of those who were beheaded the day before so as to frighten the people into obedience to the law. The doom of the "Satanic Trinity" will be, that at the close of that awful time of Tribulation the Lord Jesus Christ will return, and the "Dragon," the "Anti God," will be cast into the "BOTTOMLESS PIT" for a thousand years (Rev. 20:1-3), and the "Beast," the "Anti Christ," and the "False Prophet," the "Anti Spirit," will be cast ALIVE into the "LAKE OF FIRE." Rev. 19:20.

THE COMING OF HIS FEET

In the crimson of the morning, in the whiteness of the noon,
In the amber glory of the day's retreat,
In the midnight robed in darkness, or the gleaming of the moon,
I listen for the coming of his feet.

I have heard his weary footsteps on the sands of Galilee,
On the Temple's marble pavement on the street,
Worn with weight of sorrow falt'ring up the slopes of Calvary,
The sorrow of the coming of his feet.

Down the minster aisles of splendor, from betwixt the cherubim,
Thro' the wond'ring throng with motion strong and fleet,
Sounds his victor tread, with a music far and dim,
The music of the coming of his feet.

Sandalled not with shoes of silver, girdled not with woven gold,
Weighted not with shimmering gems and odors sweet,
But white winged, and shod with glory as in the Tabor light of old,
The glory of the coming of 'his feet.